In the REPORTER registration system, Course Admins can create courses with individual instances that users are able to register for. Each instance represents and individual session or offering of the course. Within the instance setup, course admins can use additional settings within the setup to connect the instance to a specific Moodle space.

Before setting up your REPORTER instance to connect to Moodle, it is best practice to complete the setup of online content within Moodle – which this is done through the DELTA Wolfware services.

For $0 courses being offered free of charge, you will need to request a Moodle Project space. Instructions for doing this can be found using the DELTA LearnTech Help Desk knowledge base, seen here. If there is a cost for participants to take the course, you will need to use the Moodle Outreach server. Instructions for this process can be found on the DELTA Website, seen here.

Once your Moodle course has been created, you will want to set up the activities for the Moodle course and the completion criteria for those activities. Looking for information about other online content delivery options? Visit our Online Content Support Page

I updated an instance to have a later end date, but my participants don’t see it under their Upcoming Courses, how can I fix that?

I updated an instance to have a later end date, but my participants don't see it under their Upcoming Courses, how can I fix that?

When the end date of an instance passes, REPORTER will automatically update both the instance and the registrations with no final attendance to be "Inactivate", which in turn removes the instance from the dashboard section for  Upcoming Courses.

Because of the automation related to the dashboard, there are two methods you (as a Course Admin) can use to reactivate an instance and the one used will depend on your particular need, usually either:

If you are extending the instance, that means you want everyone with attendance to be 'reactivated' so that they see the course under Upcoming. To do that you will edit the course and go to the Instances tab — then while the instance is still inactive, go to the 'Inactive' subtab. There you will select "Mark Active" which will reactivate all inactive instance registrants (this excludes 'Completed' registrations, which are people with Final Attendance). 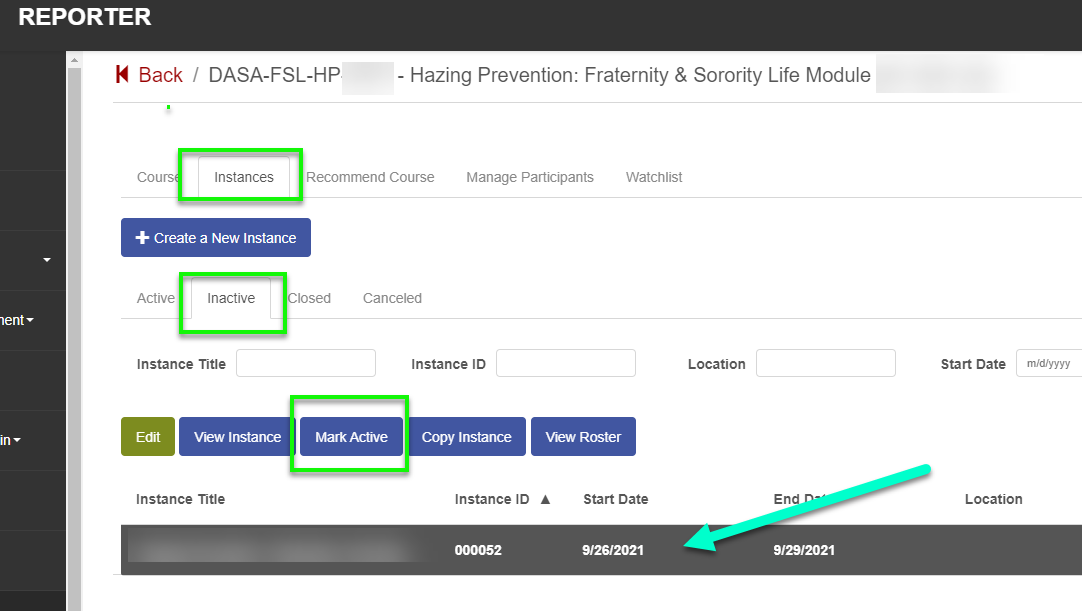 (B) Manually editing the instance and changing the status dropdown

Whereas, if your need is for retroactive registrations, you don't want the instance to show under 'Upcoming Courses' because it is not upcoming anymore but the instance status has to be "Active" in order to register additional people. In order to achieve that, you essentially want to activate the instance while leaving the Inactive participants untouched.

What is the difference between Moodle and REPORTER?

What is the difference between Moodle and REPORTER?

REPORTER is a registration system that provides administrators a way to offer training, events, and other activities for registration. The system provides registrants with primary information about the activity they are registered for and allows Course Admins to track final attendance and download reports with participant information. Moodle, however, allows administrators to host their online training or content and track interaction in detail. Moodle is a NC State’s primary online Learning Management System and is housed in Wolfware suite managed by DELTA. The Moodle Learning Management System can be used to host online content, including documents, quizzes, assignments, and more.

How do users return to Moodle after completing the training?

How do users return to Moodle after completing the training?

If your updates include changing the “Moodle Course ID” field in the instance setup, you will need to use the “Create Post” option to repost the users with the correct Moodle code.

See More about this option here.

Otherwise, if you have only updated settings (ex. enabling completion tracking), you can use Reattempt Post to resend that connection.

1). Edit the instance in REPORTER

3). Then go to the subtab for “Connection”

4). Locate the user(s) who needs to be reposted

8). You should see a “Success” message confirming the connection.

Why are users unable to see the course?

Why are users unable to see the course?)

Typically this is the result of an older registration because when users are registered, they are given an enrollment window within Moodle that determines how long they will have access to the content. Enrollments that occurred prior to June 1, 2020, were enrolled with a default of 365 days of access. Enrollments from after that date have their enrollment window set based on the related field in the instance setup. After one year, they are inactivated by Moodle, which means if they click “Access Online Content” from REPORTER, they will see something similar to: 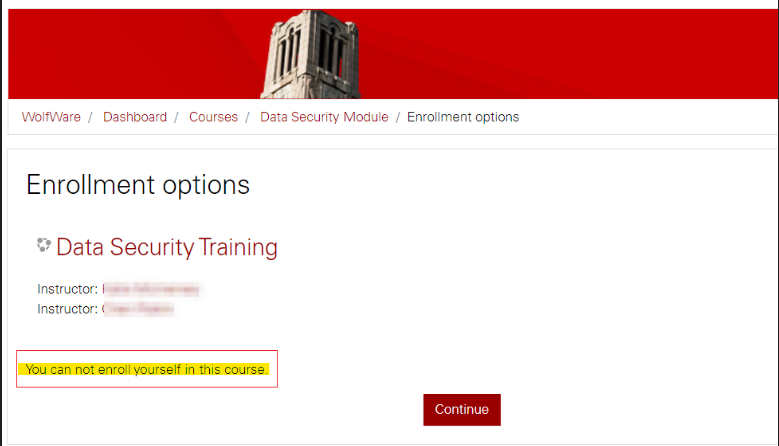 Since the issue is related to a Moodle expiration, and not REPORTER, nothing will need to be done in REPORTER to ‘fix’ their access so long as the instance is still active.

You can change or update a user’s the enrollment window directly in Moodle via:

You will also need to confirm that the users have a student role – some users lose this automatically when they expire.

To identify those users and re-add the student role:

1). Edit the instance in REPORTER
2). Go to the tab labeled “LMS POST Log”
3). Then go to the subtab for “Connection”
4). Search to find the user who needs to be reposted
5). Click on their record to highlight it in Red
6). Select the option to Reattempt Post
7). A window will open confirming the details, again click Reattempt Post
8). You should see a “Success” message confirming the connection.

How do the ‘Moodle Enrollment Period’ and ‘Instance Start Date’ affect the online content’s availability?

After registering, registrants will see the REPORTER instance listed on their dashboard (Home page in REPORTER) under ‘Upcoming Courses’. If the instance has been tied to Moodle, (Reference  – Integration Checklist), registrants will be added as ‘Participants’ of the corresponding Moodle course once they complete registration. At that moment, their access expiration is set in Moodle based on the date their registration was completed** and the value sent from the REPORTER instance field Moodle Enrollment Period (Reference  – Instance Setup for ‘Moodle Enrollment Period’).

At the time of registration (or once the registration is paid for if Pay Later), REPORTER will send the relevant instance fields, and the registrant’s information to attempt to have the user enrolled in the Moodle space (Reference  – System Interaction). If the attempt is successful, Participants are connected to that Moodle content starting at that moment and ending on the date the length of the enrollment window. As soon as the user has an active registration that connected them to Moodle, the user will get the “Access Online Content” button alongside the Instance on their dashboard under ‘Upcoming Courses’.

The instance start date will be displayed in that section but will only be referenced for the sorting order of the courses listed — the start date does not play an automated role in the availability of the instance. However, Moodle editors can use Wolfware to manually set a shared date (Reference – Update Availability) in order to restrict the availability of the Moodle space for everyone based on a certain date. That date could then be reflected in the REPORTER setup so that participants have an indication of when they will be able to access the course content.

It should also be noted that while the REPORTER Instance ‘End Date’ doesn’t affect availability within Moodle, it is import to be mindful of this date as the REPORTER system automatically marks instances as ‘Inactive’ when the end date (REPORTER Instance ‘End Date’) has passed. When the instance is inactivated, the system will also mark registrants without final attendance as “Inactive”, so that it is removed from their Upcoming Courses section.

If the end date (REPORTER Instance ‘End Date’) is extended after the instance has gone inactive, the instance has to be updated using the Mark Active button to have the instances return under upcoming courses (Reference  – Extend Online Course).

Users will only gain the “Access Online Content” option that links to Moodie if they were successfully connected. 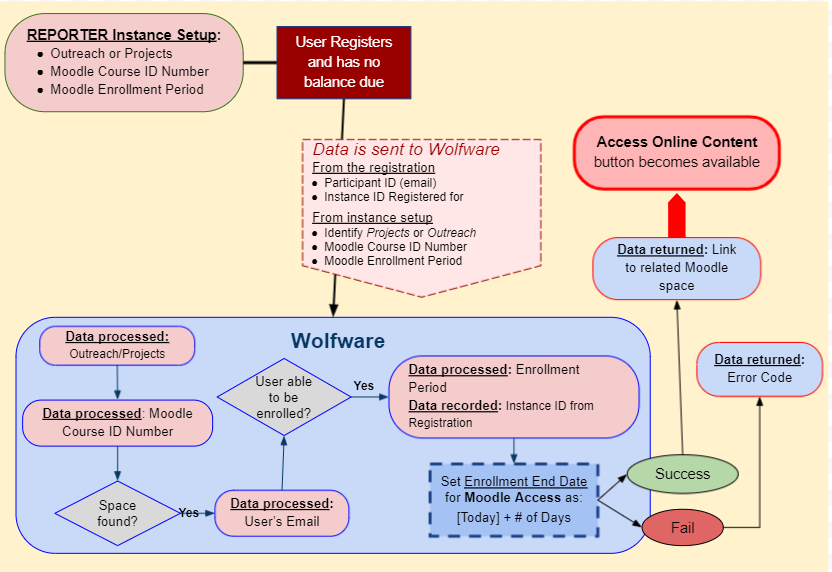 Once in Moodle, access and availability is dependent on settings that are controlled through in Moodle and/or Wolfware.

How can I connect a user to the same Moodle space through different instances?

How can I connect a user to the same Moodle space through different instances?

When a participant is registered in REPORTER, REPORTER will provide the user’s ID and the Moodle ID specified and then Moodle will attempt to place that user in the related Moodle space (reference). Moodle will either tell REPORTER that Yes, the user was just given access or No, the user was not newly given access.

If a user is registering for an instance tied to the Moodle space for the first time, you will see a successful connection as they were placed into that Moodle space as a result of the registration.

Later, if the same user was to register for a different instance that goes to the same Moodle space, when REPORTER sends the details to Moodle, Moodle will not be able to place them in the space because they are already there. From the user’s perspective in REPORTER, it will appear the same as if the connection failed due to a setup error.

Because of this, participants can only be ‘Actively’ connected to a Moodle space through a single registration. It is also important to note that if users will need credit for completing multiple instances, a separate Moodle space should be created for each completion cycle (instructions for that area available here).

How can I verify if a participant has completed all the required Moodle Activities?

How can I verify if a participant has completed all the required Moodle Activities?

Use the “Course Completion” report found in Moodle via:

At the top there will be headers that indicate what activities are included in the completion criteria (Reference: Integration Step 2), and whether they are are marked complete.

In the following example you will see the completion settings are indicated on the report headers: 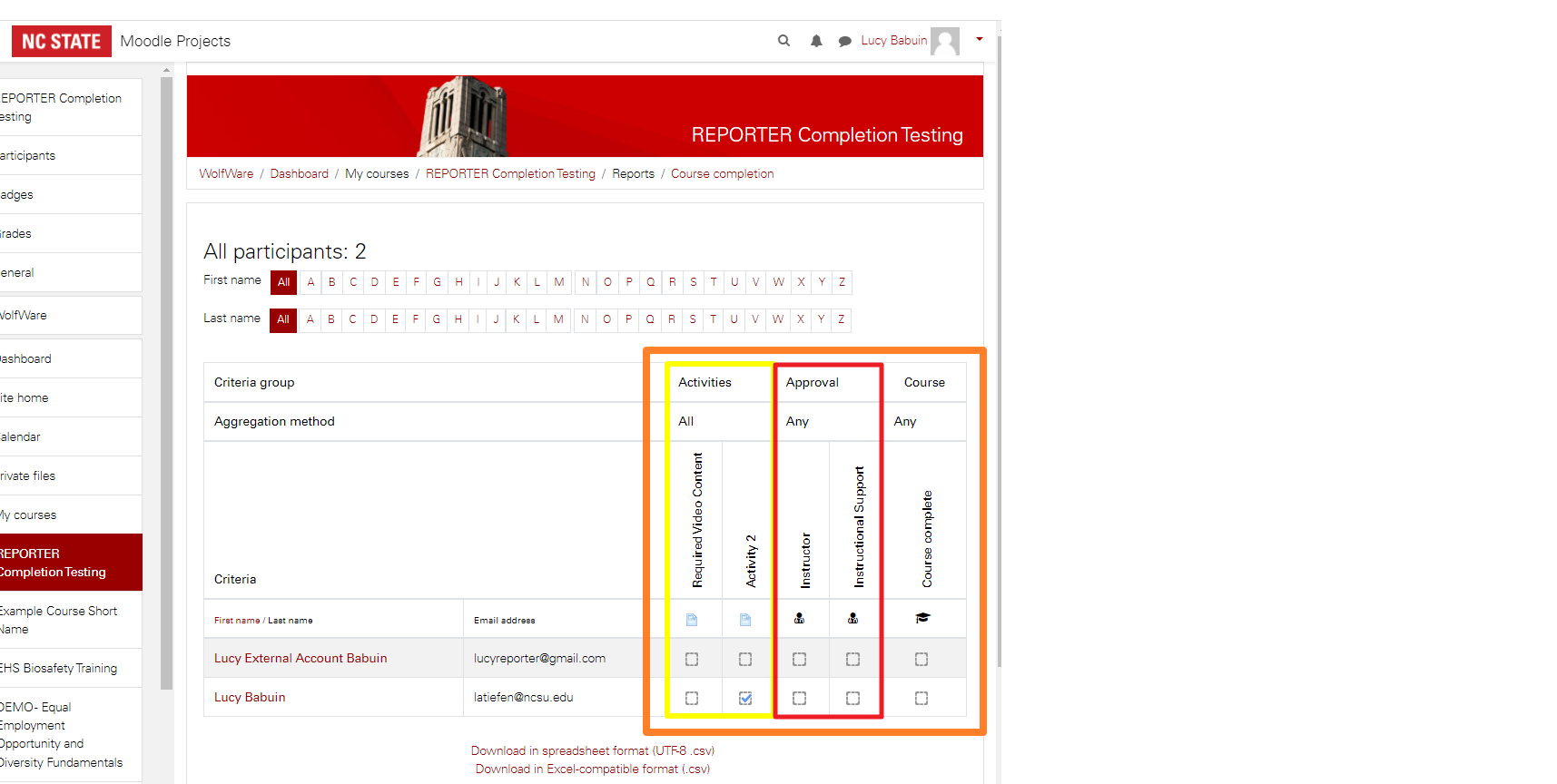 Registrations are working correctly, but completions from Moodle aren’t updating. I’ve never had completions marked even though I’ve verified that the completions are being recorded in Moodle.

Why am I missing completion records?

If you find that users are able to register for training, access the Moodle content, and Moodle is marking them complete, but those completions are not updating in REPORTER, you may need to verify and correct your completion tracking.